Tuesday we had made an appointment for Janeen to have her hair done so off we went. The shop was along a main shopping area but we didn’t spend much time (together) shopping but got the hair thing done and continued on our Dublin Adventure. I did do a bit of shopping while she was being cared for – a nice sweater and also looked at an watercolor painting of 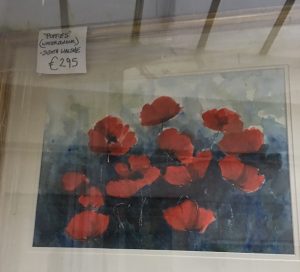 Poppies (295 euros) and had a lovely coffee.

Once we were back together we were off to explore. Our first stop was to pop into a pub called McDaids.

The building that houses McDaids can be traced back to the late 18th century and is reputed to have housed the City Morgue. It took on it’s more ecclesiastical features when it was taken over by the Moravian Brothers some time later. They developed the practice of standing their corpses in a vertical position and it’s suggested this may be the reason for the very high ceilings in the pub. It went through a litany of owners including John Nolan who had the pub at the turn of the 20th Century and it was known as William Daly’s Bar before John McDaid purchased the pub in 1936. There was no food so we had a pint and continued on our way.

The decorations, wall tile and stain glass, were really quite lovely and the sign behind the bar was beautiful.

From there we got on the Hop on bus and just took it around the City to see the sites. Once were close to our hotel we got off and got ready for our dinner at Chapter One.

Chapter One is a Michelin star Restaurant that had been recommended by Darren at The Ledbury when we dined there in London the prior week.

Reservations for an early dinner, 6 or so, were made and off we went. This restaurant with understated and elegant dining rooms is clearly doing a good job of pushing the menu with new and different presentations of Irish dishes.

We thoroughly enjoyed our dinner and the wait staff was attentive and informative. When I mentioned we where heading to Kilkenny later in the week, the GM recommended a restaurant called Campagne. Turns out the Chef-Owner of Campagne had been the Executive Chef at Chapter One prior to moving to Kilkenny. Naturally we made reservations at Campagne, but more about that later.

One Reply to “11-21-17 Dublin Pubs, City Sites and Chapter One Restaurant”