Here’s a brief overview of some of the other things we did while in New Orleans – lots of good times, lots of great music for sure.  Wedding Procession . 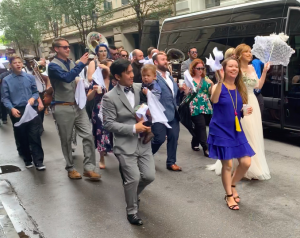 Just as we walked out the front of our Hotel this wedding march was passing by. There were several that occurred during our stay.

One lunchtime, our Road Scholar Program included a couple of hours with Doreen Ketchens.

Blowing a clarinet on the corner of Royal and St Peter streets for some 32 years as the leader of Doreen’s Jazz New Orleans Band is a far cry from Ketchens’ ambition of being the principal clarinetist in the New Orleans Philharmonic Orchestra. Over the course of a couple of hours, Doreen treated us to some history of Jazz in New Orleans, how the street musicians survive and some insights into the reasons for the traditional music we hear all over the City.

It was a foot stomping, hand clapping session so  we purchased one of her CD’s.

One evening, we had a pass to go to Fritzel’s – the oldest operated Jazz Club in New Orleans. We arrived early, which was good given the limited seating, and had a wonderful hour of Dixie Land Jazz. Housed in a 1831 building it is home for some of the city’s best musicians. In addition to regular weekend programs, there are frequent jam sessions in the wee hours of the night.

Janeen attended the lecture by Joanne Sealy introducing the writers and authors who have been influenced, and reflected the City. G.Washington Cable and Lafcadio Hearn were outsiders who found a home in the Crescent City, as did Mississippi transplants Wm.Faulkner and T. Williams. Gumbo Ya-Ya by Lyle Saxon has been republished as a treasury of Creole and Cajan sayings. We visited Anne Rice’s writing arie in the Garden District where  she enlarged tales of Yellow Fever and Dysentery and Malaria  that wiped out entire districts and households, leaving the almost dead to cope. Lillian Hellman followed in the steps of Kate Chopin and Truman Capote recorded the eccentrics of the area, perhaps not as concisely as John Kennedy Toole in A Confederacy of Dunces.

On one of our excursion days, we went to the National WWII Museum. 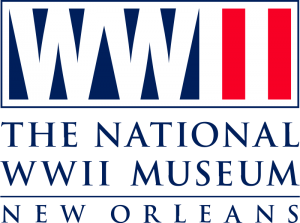 We have been in a number of museums both in the USA and in Europe over the last couple of years and this place ranks right up there at the top. The museum focuses on the contribution made by the United States to Allied victor in WWII. Founded in 2000, it was later designated by the U.S. Congress as America’s official National WWII Museum. One of the highlights is a movie narrated by Tom Hanks which covered both the Pacific and European theaters and was very moving.

There were displays for both areas and well documented with lots of interesting things to look at.

One afternoon, I took off and Janeen went to the New Orleans School of Cooking.

Over the course of an hour or two they made Gumbo, Shrimp Etouffee  Pralines and Bananas Foster – getting to eat everything at the end of the meal.

Sure, New Orleans is clearly a ‘party city’ but it is steeped in history and interesting architecture. The buildings and architecture are reflective of its history and multicultural heritage. In the morning, Nellie Watson, a local architect and long time resident, held a discussion about the culture and architecture of the City. After spending time in the ‘classroom’, so to speak, we boarded the Coach and headed out for a tour to see some of the fantastic homes throughout the City. From Creole cottages to historic mansions on St. Charles Avenue there is a rich diversity to explore.

Creole Cottages (The term “Creole” was created to describe citizens in New Orleans after America took control of the city in 1803. French and Spanish descendants who were early settlers of the city adopted the name to distinguish themselves from the influx of American citizens occupying the city.) These are scattered throughout the city with most being built between 1790 and 1850. Creole cottages are 1 or 11/2-story, set at ground level almost touching the street with steeply pitched roofs. They have a symmetrical four-opening façade wall and a wood or stucco exterior.

American Townhouses ,a style found in the Central business district and Lower garden District, are narrow brick or stucco three-story structures featuring asymmetric windows and iron balconies on the second and third floor. Built between 1820 and 1850 in the area mostly occupied by the ‘new’ residents coming into New Orleans.

Creole Town Houses – these are the most iconic pieces of architecture in the city of New Orleans, comprising a large portion of the French Quarter. Creole townhouses were built after the great fire of 1788 that destroyed much of the city. They were built from about 1788 through the mid 1850’s or so. The original wooden buildings were replaced with structures with courtyards, thick walls, arcades and cast-iron balconies. The façade of the building sits on the property line with an asymmetrical arrangement of arched openings. These come with steeply pitched roof with a parapets, side-gabled with several roof dormers and strongly show their French and Spanish influence. The exterior was usually brick or stucco. These are the beautiful buildings spread throughout the French Quarter with many having retail or restaurants on the first level with either additional restaurant space above or homes.

Found in the Garden District, Uptown and other areas are Raised Center-Hall cottages. These homes were raised enough above street level that there is sometimes a garage or work area on the ground level. They feature porches that stretch all the way across the front with columns. Greek Revival and Italianate center Hall Cottages are most common but Queen Anne and other Victorian styles stand proudly in between.   These were built between 1803 and 1870 supporting the influx of new Americans coming into the City and usually away from the old section – French quarter.

Found all over New Orleans, and built between 1850 and 1910 are Shotgun Houses. These are long and narrow single-story homes that have a wood exterior and are easy to spot. Many feature charming Victorian embellishments beneath the large front eve. The term “shotgun” originates from the idea that when standing in the front of the house, you can fire a bullet clear through every room in the house. Some of these have been converted to have what is called a camelback – a second story set at the rear of the house.

One of the last styles of housing is the Double-Gallery house. Found in the lower Garden District these two-story houses feature stacked and covered front porches, box columns and front door off to one side. They look a lot like townhouses but they are set much further back from the sidewalk. These were built between 1850 and 1910.

After WWII, the California bungalow style of home started to be built in neighborhoods. These are noted for their low slung appearance, being more horizontal than vertical with exterior wood siding maybe with a brick, stucco or stone porch with flared columns and roof overhang. Not the most pleasing of the styles as it really doesn’t “fit into” the general architectural style of most neighborhoods where they have been built.

Nellie gave us a great tour and a good appreciation of the different histories and styles being built reflecting changes over time. Glad we had this as part of our Tour of New Orleans.

New Orleans – reflections about this lovely City. We had visited many years ago when we drove across country in 1978 on our way to Los Angeles. So, when we found the Road Scholar Tour of New Orleans, City Of Mystery & Intrigue it seemed like the right thing to do.

After checking into the Hotel Monteleone we joined 28 other Scholars to learn about this wonderful city.

Dubbed affectionately by some as the northernmost Caribbean city, New Orleans revels in its giddy blend of European refinement and carefree effervescence, a place where virtue and vice are celebrated in equal measure. We where invited to surrender to the intoxicating charms of “the Crescent City” that have long fascinated artists, writers, musicians and scholars. We experienced live New Orleans jazz, took field trips inside and outside the French Quarter and Garden District; got perspectives on architectural and literary landmarks, and enjoyed the unique culinary adventures as well as the National World War II Museum.

New Orleans is a consolidated city-parish located along the Mississippi river. With a population of about 391,000 it has the most residents of any city in Louisiana. The Port of New Orleans, that extends to Baton Rouge on the Mississippi river, is considered the economic and commercial hub for the broader Gulf Coast region and the gateway to the world, both with shipments out of the port and products brought in from all over the world.

Founded in 1718 by French colonists, New Orleans was once the territorial capital of French Louisiana – was ruled by the Spanish from 1762-1801,given back to France and ultimately sold to the United States by Napoleon  in the Louisiana Purchase of 1803. In 1840, New Orleans was the third-most populated city in the United States and was the largest city in the American South until after World War II.

Needless to say, the flat elevation (New Orleans is actually below sea level) has resulted in flooding, resulting in various levees being created, large drainage pumps being installed and general a fear of the Mississippi and any hurricanes (think Katrina in August 2005).

Our first day started with a general introduction by Ms Ann, a lifetime resident of New Orleans, covering its history culture and discussion about levees and the role Lake Pontchartrain plays in protecting the City from flooding.

Following our “classroom intro”, we boarded the coach and drove around getting a feel for the city and learning about the various areas.

This included a visit to the one of the famed St. Louis above-ground cemeteries of the City.

Along the way, we stopped at the The Sydney and Walda Besthoff Sculpture. Atypical of most sculpture gardens, this garden is located within a mature existing landscape of pines, magnolias and live oaks surrounding two lagoons. Lots of very interesting sculptures including some familiar artists  and pieces we have seen in other locations. 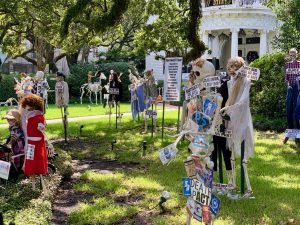 It’s beginning to look a lot like Halloween in Uptown! The Skeleton House, an annual tradition, is back in all its glory at the corner of St. Charles Avenue and State Street in New Orleans.

The owner has been decorating it for years — and both locals and tourists love it, especially the puns! Louellen Berger, who lives in the home and is in charge of the decorations, says it’s something she looks forward to year after year. 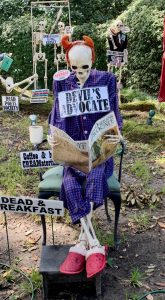 “To see people of all walks of life, and from in town out of town and whatever get excited and enjoy this, because I don’t want it to be scary, want to be funny,” Berger said. “I want to be lighthearted and make everyone laugh. I hope I created that.” 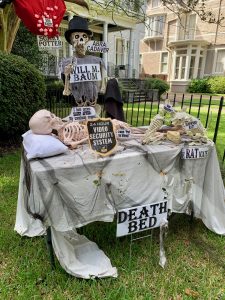 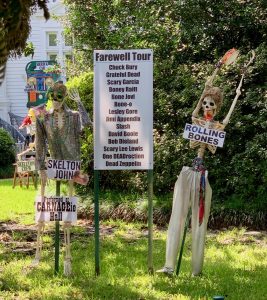 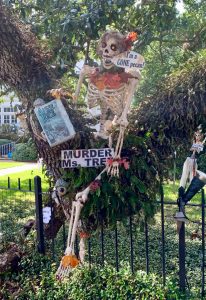 We stopped here during our Architectural tour of the City. It was great to see all the decorations – kinda reminded me of the Haunted Mansion at Disneyland (well, not really but hey, it’s my Blog and I can say what I want). In any event it was a nice quick visit to an interesting part of this wonderful City. 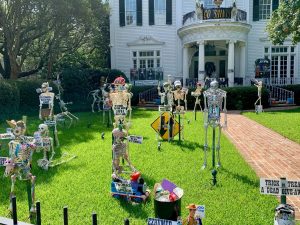 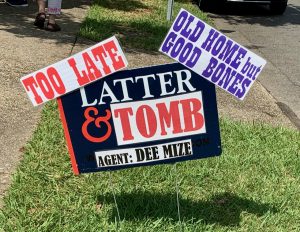