After checking into our B&B, The Mahogany Manor,

we decided to take our selves for a walk into the city center. Well, not really what we normally think of as a City Center, but certainly the historical center of Saint John. From the beginnings of the American Revolution in 1774, through 1783 some 40,000 British subjects fled north to escape persecution. Many of these “Loyalists” as they were called arrived in Saint John and created a new home.

The town has a number of historic places including the County Courthouse in King’s Square (1825), City Market (1876)

and a number of other structures that have been around for a while. It was an interesting walk with much to see.

Along the way we passed a number of restaurants – Taco Pica, Taste of Egypt, Rocky’s Sport’s Bar, Churchill’s Bar & Bub, Thandi – but the one that caught our eye was Italian By Night. Who knew we would find a great Italian Restaurant in Saint John New Brunswick Canada..

We arrived early for our 5PM reservation, but we were greeted by Dorothy at the Bar with a wide smile and a hug like we were old friends!

so we took a seat at the bar and had a glass of wine. While we were there we were able to meet one of the business owners, Gord Hewitt.

He was sampling a new Italian wine they might add to the menu and when I said we had previously had the bottle (which we had not too long ago) he shared a glass with us. Very nice.

Once we got to our table, Abby, our waitress, took charge and guided us through the menu and offered her recommendations.

Along the way, Elizabeth Rowe stopped by the table

– she is one of the owners along with Gord and Michele Hooton (we didn’t get to meet her, she is traveling in Italy at the moment). From Elizabeth we learned about the history of the restaurant (formally a family owned furniture store for over 100 years) and how they developed the menu. They had started with a deli about a block or so away and started doing Italian during the evening – thus the name Italian by NIght. Once the realized there was an actual customer base that would support a restaurant they took the big step and moved from a very small space (1700 SF) to a much larger space of over 4,000 SF (the former furniture store). After personally doing the remodel and getting the menu set they opened about 5 or 6 years ago and never looked back.

The menu has a number of traditional presentations and a few with an interesting twist. To start we had the Panzanella – a Tuscan salad of tomatoes, string beans, red peppers, cucumbers, red onion, capers, arugula, and house-made croutons with a house vinaigrette dressing.

. I had the Lasagna Grande – Fresh pasta, Bolognese sauce, mozzarella with Parmesan cheese. Janeen’s dish was piled high with clams! While I have had lasagna

any number of places this presentation was one of the best. When sou chef Steven stopped by at our request,

we made sure he knew how pleased we were with our choices. He was soon away to the UK to visit family, but loves St. John and hopes to stay on in New Brunswick.

Throughout the meal, Abby made sure we had wine to drink and all was well with the world. While I don’t have a clue if I will get back to Saint John I can safely say that if I do it will include a stop at Italian By Night.

We had started out on this northern loop with Prince Edward Island (PEI) as our goal. This came about as our friends, who live in Bethlehem PA, Rita and Jim, often talked about his (Jim’s) roots that come from the PEI area. As a result we had it in our heads to at least take a gander at this place in the far east of Canada. PEI is a one of the three Maritime Provinces of Canada and is the smallest province in both land area and population. It is truly an island connected to the mainland by both a ferry and the 8-mile Confederation Bridge. We arrived on July 4th – a Wednesday in Canada (thus no fireworks or other events…) and stayed at a lovely B&B in Miscouche called Prince Country Inn.

Herb and Roger have been operating the B&B for a number of years – however, they are snowbirds heading to Florida for 6-months of the year. It was a nice place to base our couple of days on the Island.

The backbone of the economy is farming; it produces 25% of Canada’s potatoes and you see the fields everywhere you go.

Additionally there are of course the obligatory potato products, pictures and places to visit in most of the little towns.  Fishing also plays a part of the economy as evidence by the various stands, boats and lobster pots we saw stacked around.

Without a real agenda, we spent the first day just wandering around the area and having a nice late lunch at Open Eats in Summerside. The following day we headed out to the

Cavendish Boardwalk – a collection of various local shops towards the Atlantic side of the Island – and had a wonderful Moo ice cream cone. Since spring came late, peonies are in bloom.

From there we just sort of drove around on the eastern side of the island enjoying the warm day,

the beautiful roadside flowers and the views of the ocean. Along the roadside there were lots of lupine in various colors – red, pink, white and purple.

They grow wild along the roadside and added lovely color to our day. For lunch we headed back to Summerside and grabbed a table at the Deckhouse Pub with a view of the water.

We finished our visit to the Island and got ready for our trek the following day (which turned into a blowing rainstorm) to Saint Johns, New Brunswick.

From time to time we like to jump into the deep end for a dining experience. Exploring Quebec City was no exception. When we first came into town I checked several of the websites I’ve used in the past to figure out where we might go. After looking at the options, I discovered Laurie Raphael. 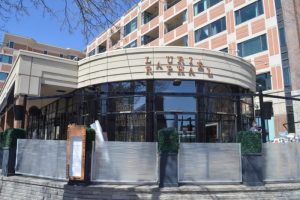 This is a family operation having been started by Chef Daniel some 27 years ago and now managed by his son, Raphael. There are two locations; the original in Quebec City and a second restaurant is now in Montreal. The venue has limited seating and a set menu, either a 3 courses or 5-course selection option. We arrived early, as is our custom and were introduced to chef Pierre and staff before being seated in the bar prior to moving to the dining room. 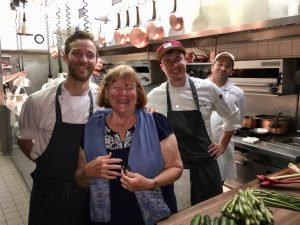 Seems they like to start the experience in the bar with a glass of wine or a cocktail along with a amuse bouche or two. I had a nice Sancerre and Janeen a French Rose to go with our two different presentations. 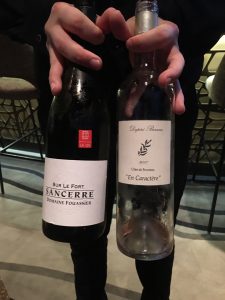 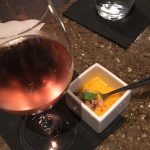 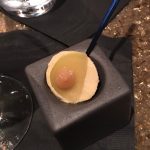 At this point, Hugo, our food guide for the evening, explained the menu options – of which there are two. A 3-course meal with a “sea” and “land” on each course or a five-course meal again with 2 options on each course. Hugo indicated that the overall portion size would be the same whether we had the 3 or 5 so naturally I chose the 5-course option.

Having decided to do the full tasting menu, we were seated in the dining room, which is relatively small and relaxed. 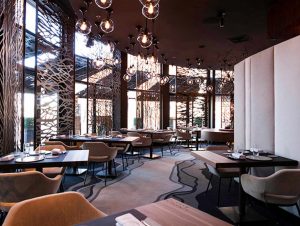 The décor featured laser cut metal panels along the window side and muted colors for the seating, walls and floor. In the middle of the room was a brass “tree” about 8 feet tall with a serving table around it for the wait staff to stage items prior to placement on the table. It is clear they are striving for feeling of being in nature. Bunches of fresh vegetables were displayed near the kitchen.

Hugo, our waiter, explained the menu and presented our wines throughout the evening. Janeen had mostly local Niagara peninsula, wines while David had some French, California and Italian selections. We shared sips on all courses to see how they matched the dish presented. Dinner lasted about 3 ½ hours – just about right for a tasting menu.

The experience was wonderful, the small bites and presentations done very well and the unique flavors of each seemed to come out in unique ways. Janeen was most impressed with the first course “sashimi” halibut and scallops enlivened with citrus and rhubarb flavors. David enjoyed the quail, prepared two ways, with lovely morel mushrooms.

We decided to take the Hop-on-hop-off bus around the city and learned a good deal about Quebec and it’s history.  Saw a lot of interesting spots and enjoyed the 2 hours or so of the adventure.

We had a nice lunch along the way and walked back to our hotel to get ready for our dinner.