Prior to leaving for this trip, I had arranged a guide to take us out of Prague and into some of the historical sites.  We were picked up by Ilona and her husband, Peter,  who acted as the driver and off we went.

The first stop was to Český Krumlov Castle located about 2 ½ hours outside of Prague. The Castle dates back to 1240 when the first castle was built by the Witigonen family, the main branch of the powerful Rosenberg family. For the next several hundred years it pass through a number of Noble families ultimately passing to the Schwarzenbergs. After WW II it ultimately became a property of the Czech government. The entire area, castle, village and surround areas, were declared a national monument in 1989 and in 1992 it was added to the UNESCO World Heritage List. 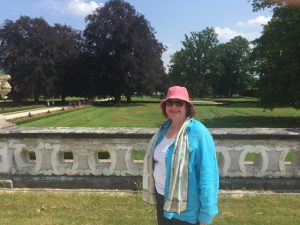 and walked through several squares ultimately getting to the main gate of the castle and into the town. Along the way we had beautiful views of the river, the village and the surround buildings. 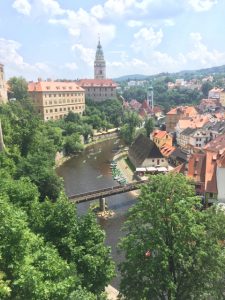 With each square there were interesting sites to see – faux windows and doors on the walls, 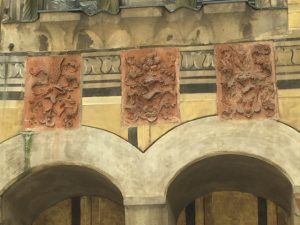 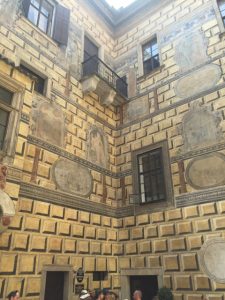 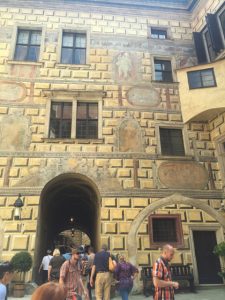 representations of the coat of arms of the Rosenberg family and historical objects like rock cannon balls.  Interior shots of the Castle show how richly appointed all the rooms are. 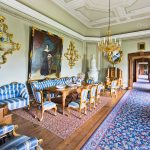 After leaving the castle we walked through a portion of the village and across a bridge to the main section.

The village has winding small cobblestone streets lined with shops, restaurants and open areas – squares. We walked to an over look to look back at the castle and through the church. 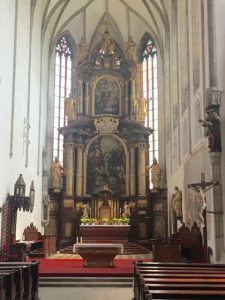 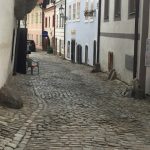 Note the stones at the corner of the buildings.  This was to protect them from horse and carriage impacts.

After a lunch of local fare 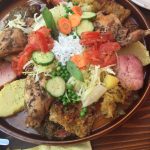 we headed back to the car to continue our adventure. 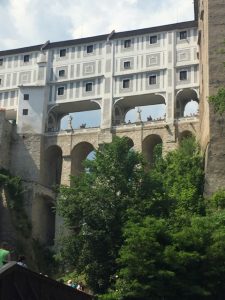 After connecting with Peter, we drove to České Budějovice for a quick tour around the square with it’s impressive buildings. 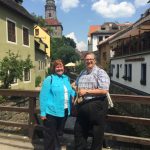 Budějovice has long been well known for the beer brewed there since the 13th century. For a time, the town was the imperial brewery for the Holy Roman Emperor, and Budweiser Bier (i.e. beer from Budweis) became, along with Pilsner from Plzeň, one of the best-known lagers. Brewing remains a major industry. This is the town that the American brewer took the name for Budweiser Beer

From here we went on to Hluboka Castle.   This historic chateau and is considered to be one of the most beautiful castles in the Czech Republic. In the second half of the 13th century, a castle was built at this location and rebult several times over the years. Finally being modified into it’s current form by Adam Franz von Schwarzenberg in the beginning of the 18th century. It is in the romantic style of England’s Windsor Castle. The owner fled the country in 1939 to escape from the Nazis. 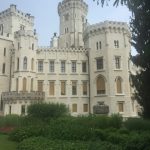 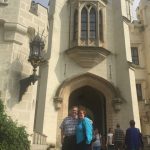 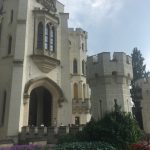 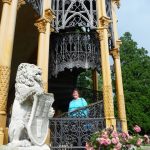 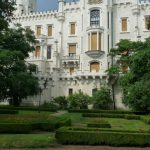 Today’s adventures were all south of Prague.  Tomorrow we head east to see other sites not normally on the common tour route.